The Startup Idea Validated in 2 Days Before Writing Any Code

This is a really useful video and advice I can really relate to, especially thinking back to my first attempt at building a property website ‘with a difference’ back in 2003. I think I fell into the trap of being washed away by a conviction that my idea was going to be a roaring success without sufficiently testing or validating the idea.

Peter Lewis is Co-Founder of UK website voXup which aims to gather local opinion from residents to present to local Councillors for a response. Arguably, the non commercial sector of opinion might be one of the very last areas of community which has yet to be fully explored by technology in order to gauge the demands of the people which matter.

Lewis explains here how the business idea was validated without having to write a single line of code. After all, most applications are essentially a way of automating what might be able to be done in the real world, or manually. Therefore Lewis went to the local pub armed with pen and paper to validate the conviction that the idea would work.

The most important factor with this approach was to strip the idea down to exactly what value it provides to users, no knobs and whistles, just the basic value proposition. Ideas need to be validated in the right forum and the perfect place for voXup to be validated was the local pub as this was a place where local people gather and discuss local topics.

Once Lewis had gathered people’s opinions on the topics that mattered, the next task was to approach a local Councillor to get responses to these topics and present them back to the participants. The whole process was a manual exercise of what the app would automate and the idea was validated when people started responding to SMS messages that were sent out containing responses from the Councillor. 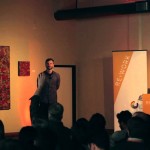