A lot of our work in Melbourne this year has been helping clients build successful teams that have approached infrastructure and operations challenges both from a cultural perspective, bridging the ‘them and us’ gap between delivery teams and infrastructure, whilst also using configuration management and containerization tools which can be used at scale.

As a snapshot of containerization for Developers and Ops (for us mere mortals!) Greg DeKoenigsberg explains at All Things Open how Ansible is to Administrators as Docker has made the lives of Developers easier, that is, after returning from a Meetup tour of Europe to find out that Ansible had been acquired by Red Hat.

We all know that Docker is not magical. We have been using these things, we’ve used LXC for various reasons, we sort of know what the background is but it was only a small subset of people in IT that had enough knowledge at the right time to be able to take those technologies, figure out how they worked and put them to best use.

So it’s very interesting that Ansible is largely the same way just from a different direction, so here’s the quick piych on Ansible for those that don’t know much about Ansible.

Ansible is basically distributed SSH with modules and idempotence. It is used a configuration management tool and also as an orchestration tool. There are many other configuration management tools, there are other orchestration tools, Ansible makes it all easier, does it all at once and because it runs on SSH there’s no bootstrapping necessary. Any machine than has SSH on it can be managed by Ansible.

At a high level DeKoenigsberg’s talk gives an idea of the type of understanding that we feel allows us to effectively engage with growing and changing infrastructure teams and prospective team members to make sure that we are matching the right people to the right cultural and technical environments.

DeKoenigsberg talks about hyperscaling and the use cases of containers beyond it being just a fad, from the learning curve of containers being a mini virtual machine where users will SSH into a container and treat it like a server which is saving a heap of space but also make changes and configuration directly into it to the fully distributed notion of a container as a microservice. 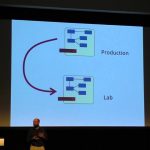