Bryan Crotaz is an extraordinary model of how to mix deep technical skills with acute business intellect. He started Silver Curve in 2010 to provide digital signage boards which run off what are essentially mobile phone chips (Raspberry Pi) which vastly reduce costs against PCs usually supporting each monitor.

Silver Curve developed a piece of software called Aperture which allows the Raspberry Pi to deliver the same performance as a PC to digital signage including video, text effects as well as working with touch screens.

In this presentation Crotaz talks about the bigger picture of Ember.js and how Silver Curve deploy it with third party servers. The Ember UI is designed for Silver Curve clients to be trained very quickly and easily as an appealing alternative to the third party UI using the same API, which is better suited to enterprise scale users.

Silver Curve’s overall architecture allows them to scale application servers automatically with Amazon and rollback fast if required, also allowing them to keep JS and CSS off the main server and Crotaz says that they set up the entire system from scratch in about two weeks.

Battling a slow internet connection from his phone Crotaz shows their own UI against the 3rd party interface and I’d recommend watching for anyone that has not used Amazon’s cloud services as he gives a quick tour of the Amazon dashboard showing the virtual machines they are currently using, load balancers, CloudFront distributions and running through editing behaviours.

Silver Curve also use Bamboo for Continuous Integration. Go to about an hour and seven minutes where Crotaz shows the demonstration changes being tested with PhantomJS, built and deployed. 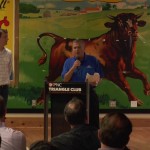